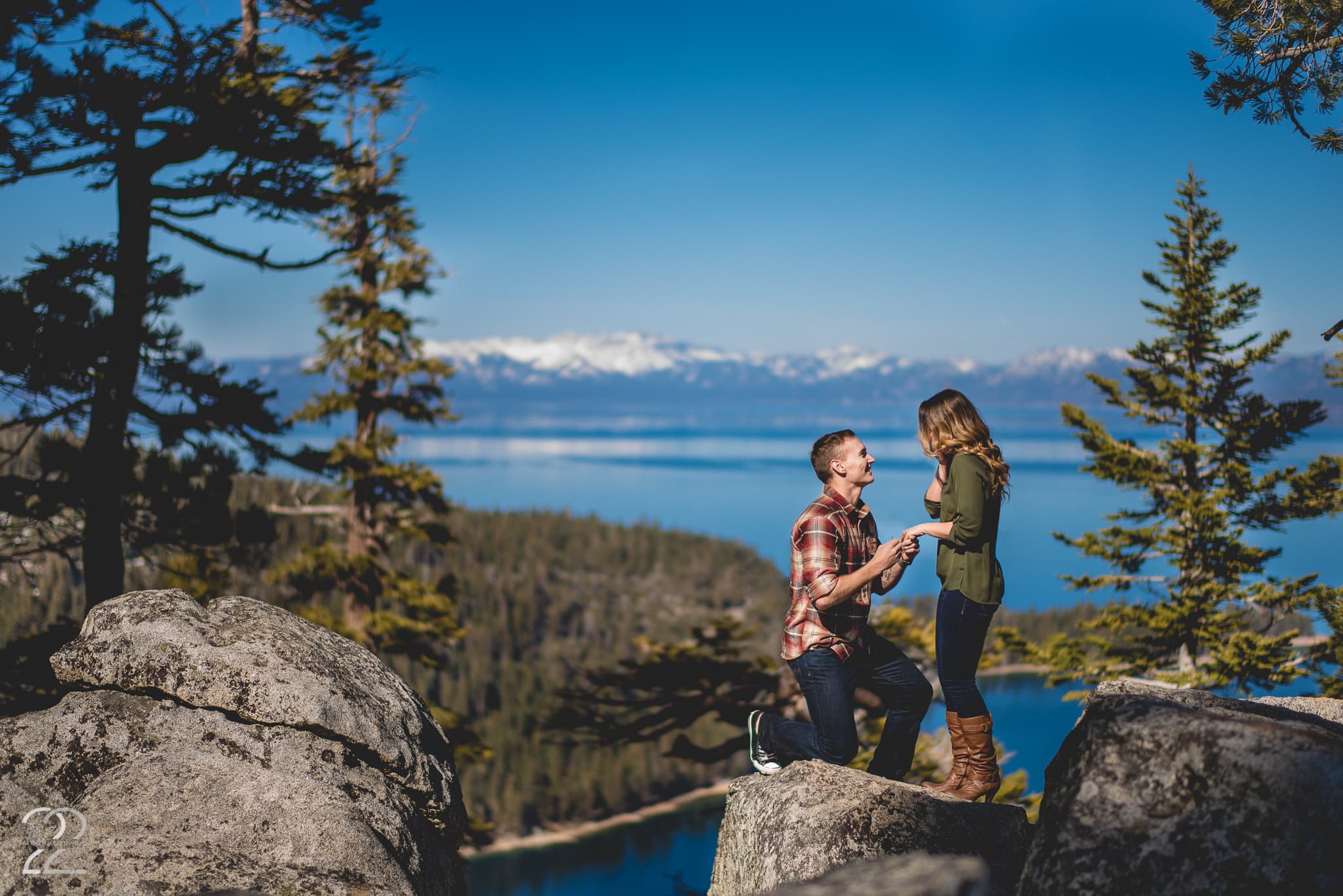 When you start out a relationship by telling a couple, “Hey, I have a really fantastic idea, but it’s going to be an adventure…” and the response in return is, “Awesome!” You know you’ve found a fantastic couple. Luke & Hayley are adventurous, engaging, and just plain fun. From the moment I met them at Starbucks, where all good adventures begin, I knew we were going to have a great time wandering Lake Tahoe’s beautiful terrain. And man, did Lake Tahoe deliver!

We began our day planning to hike up Maggie’s Peak to overlook all of Lake Tahoe. When we arrived, we quickly realized that Tahoe’s recent snow storm had been quite a doozy, and would make our hike a bit more than “moderate,” as the hiking reviews had called it. Not to be deterred, Luke and Hayley said they’d go for it, and so we began our ascent of Maggie’s Peak…which was definitely an experience! The snow was up to 3 feet deep in places, and as we worked to follow the snow shoe and ski tracks that had packed down a path, we found ourselves dropping thigh-deep into the snow on numerous occasions. After about an hour and a half of pushing upward, we were rewarded with a stunning overlook of Lake Tahoe about halfway up to the peak. Stunned by its beauty, we agreed we needed to capture the area. We went to work, shooting in a couple locations and simply having a blast.

After about 45 minutes, we were wrapping up in that location, and Luke quietly caught me as Hayley was working her way through the snow ahead of us. Quickly he asked, “Hey, would it be okay if I proposed to her before we hike back down?”

I was so thrilled for the two of them, and Luke and I quickly devised a code word to signal when he should drop to one knee, and they walked back over to the panoramic view once more for “just one more shot.” Little did Hayley know what was going to happen, and was beyond surprised as Luke dropped to one knee and asked her to be his wife!

Joyful tears and celebratory phone calls were made as we made our trek back down the mountain, which happened with renewed zest and excitement! It was so fun to hear Hayley’s family cheer on the other line, and once we made it back to the car, we headed to our next location: Sand Harbor on the Nevada side of Lake Tahoe.

What started out as a couples’ shoot was now a true engagement session, and it was so much fun to capture their joy and excitement at their new journey. They both were all smiles as we hopped from rock to rock, through tide pools and wet sand, to reach the very furthest rocks from land at Sand Harbor. From there we chased the sun, and captured a beautiful sunset as it sunk lower in the sky before disappearing behind the mountains surrounding Tahoe.

This shoot was absolutely one of the most fun experiences I’ve ever had the privilege to be a part of, from the adventure of trekking through feet of snow, to the surprise proposal, to rock hopping and watching the sunset. Luke and Hayley, you two are fearless, fun, and absolutely a joy to hang with. Thank you so much for allowing me to be a part of your adventure, and congratulations on your engagement! It’s the just beginning of your amazing journey together, and I know you’re in for the adventure of a lifetime together.

Thanks so much! They were a blast, and it was such a thrill to be able to capture such an amazing time for them. Luke was sneaky, and I love it! 🙂