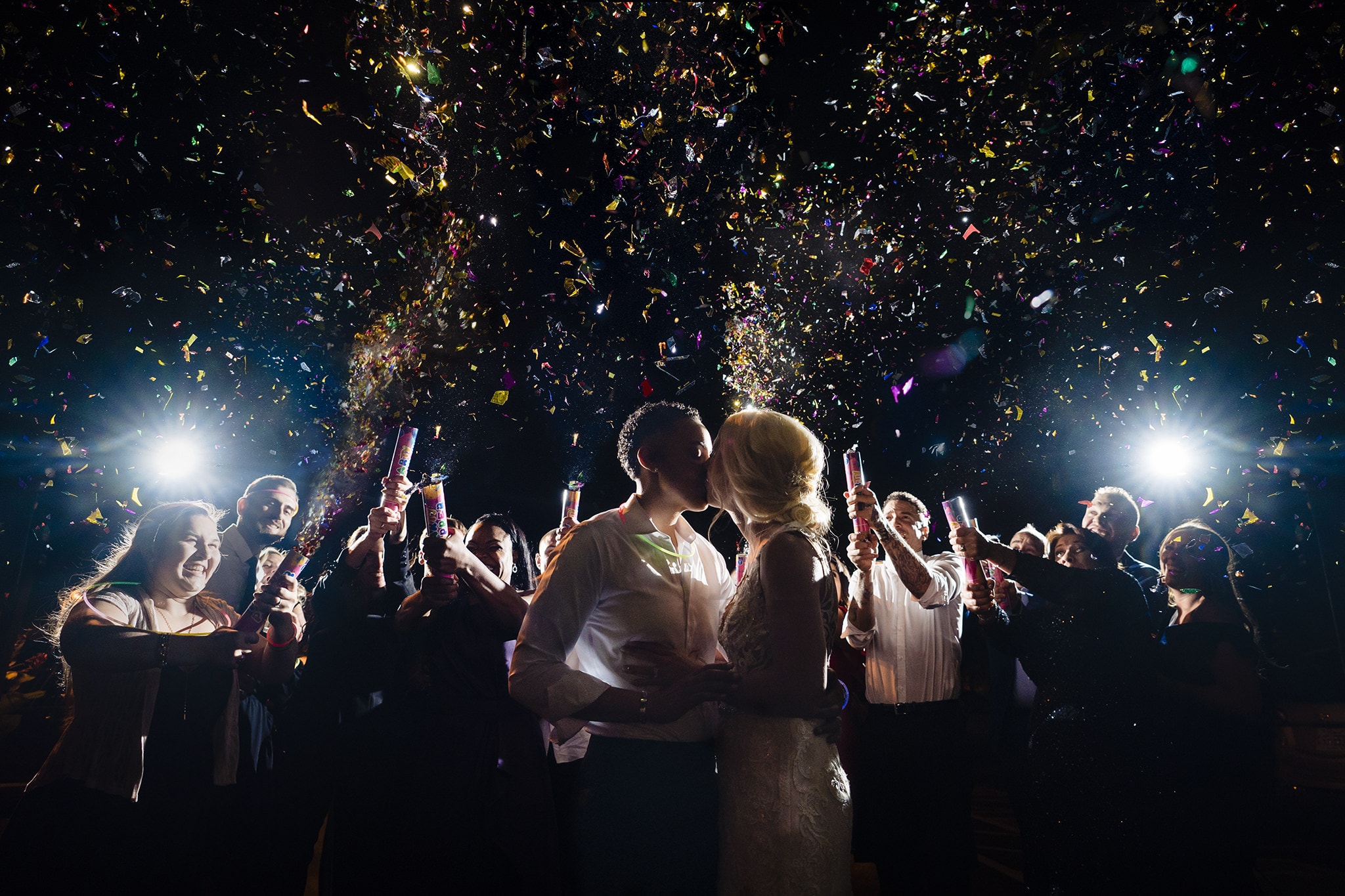 Stories are everywhere. In every part of the day, you’ll see stories unfolding, if you simply allow yourself to watch for them. As a wedding photographer, it’s my job to see those stories unfold and document them for my couples. Watching not only the two of them on their wedding day, but also their loved ones. How do they love the couple? How does the couple love one another? And how does the couple love their guests? These two are so amazing that a month later, I’m still trying to fully digest how awesome their wedding was. Soon, you’ll see why their autumn wedding in downtown Dayton was one for the books!

First off, Mylan told me the story of how their wedding license was lost, run over by a car, and wound up being found in a cornfield. Then, as if the story wasn’t funny enough on its own, she showed me the ill-fated license…which literally had tire tracks across the envelope! And, as hilarious and random as the lost marriage license was, Mylan + Christina’s love story is just as fun.

Meeting Christina + Mylan in Columbus for their amazing engagement session was the start of a fantastic friendship. From the moment I met them in the Short North, I knew they were a special couple. The way they love one another, the way they look at one another, and the fact that they are truly friends is a beautiful thing. It’s rare. There’s a genuine connection between the two of them, and it’s a joy to get to capture it for them. And, upon meeting their families at the wedding, I could tell they get their loving spirits naturally; their friends and families are just as incredible as them!

Olivier and I met up with the two of them at the Marriott at UD for not only their getting ready, but also their ceremony and reception! Having a singular location for all of their needs was super nice, and allowed them to have no stress on their wedding day regarding traveling. Plus, the Marriott is stunning! Additionally, the fact that Party Pleasers and Furst Florist created incredible decor for the reception, and you have the makings of a beautifully classy autumn wedding in downtown Dayton.

The thing that sticks out to me the most about Christina and Mylan is their genuine love for one another and their family. Opting to keep their wedding party to one person apiece, the intimacy and love shown was beautiful. Christina’s mother took so much care as they prepared. Mylan’s brother stepped in to assist her with her tux. And, through it all, Mylan’s father FaceTimed from California, cheering her on every step of the way.

You see, Mylan’s father was unable to attend, but wanted to be present. And, throughout the day, the two of them made that possibly by FaceTiming. Each pivotal moment, Mylan and her father were there. Through the first look, he watched. They chatted as she prepped. And, when it came time for the ceremony, he was there, front row. Technology has made such bounds, that crossing the country was possible, because of FaceTime.

And, what a beautiful ceremony it was! Mylan stood with a stunned smile as she watched Christina make her way down the aisle to her. Kissing her father one last time, Christina grasped hands with Mylan, and started their lives together as Mrs. and Mrs. And, once the formalities were done, they kicked off one of the most epic parties I’ve ever been a part of!

What makes an epic party, you might ask? Well, Mylan + Christina had quite a few tricks up their sleeves! Armed with glow sticks, confetti poppers, and tequila squirt guns, these two headed off a party that their guests will probably be talking about for years to come! The laughter, ridiculous dance floor shenanigans, and epic confetti popper send off were all a blast, and I had a blast catching all their moments. Yes, they know how to love. They love one another, they love their loved ones, and are loved in return. And that, my friends, is exactly what a wedding day is all about.

Congratulations, Mrs. and Mrs. Woods! It was such an honor to get to capture your moments for you. I wish you all the best, and you better know you’re stuck with me now. Anyone who can throw such an amazing wedding day is clearly a friend for life!

And, a huge thank you to Olivier of Twinography Studio, who came to photograph this wedding with me. You’re amazing, my friend!