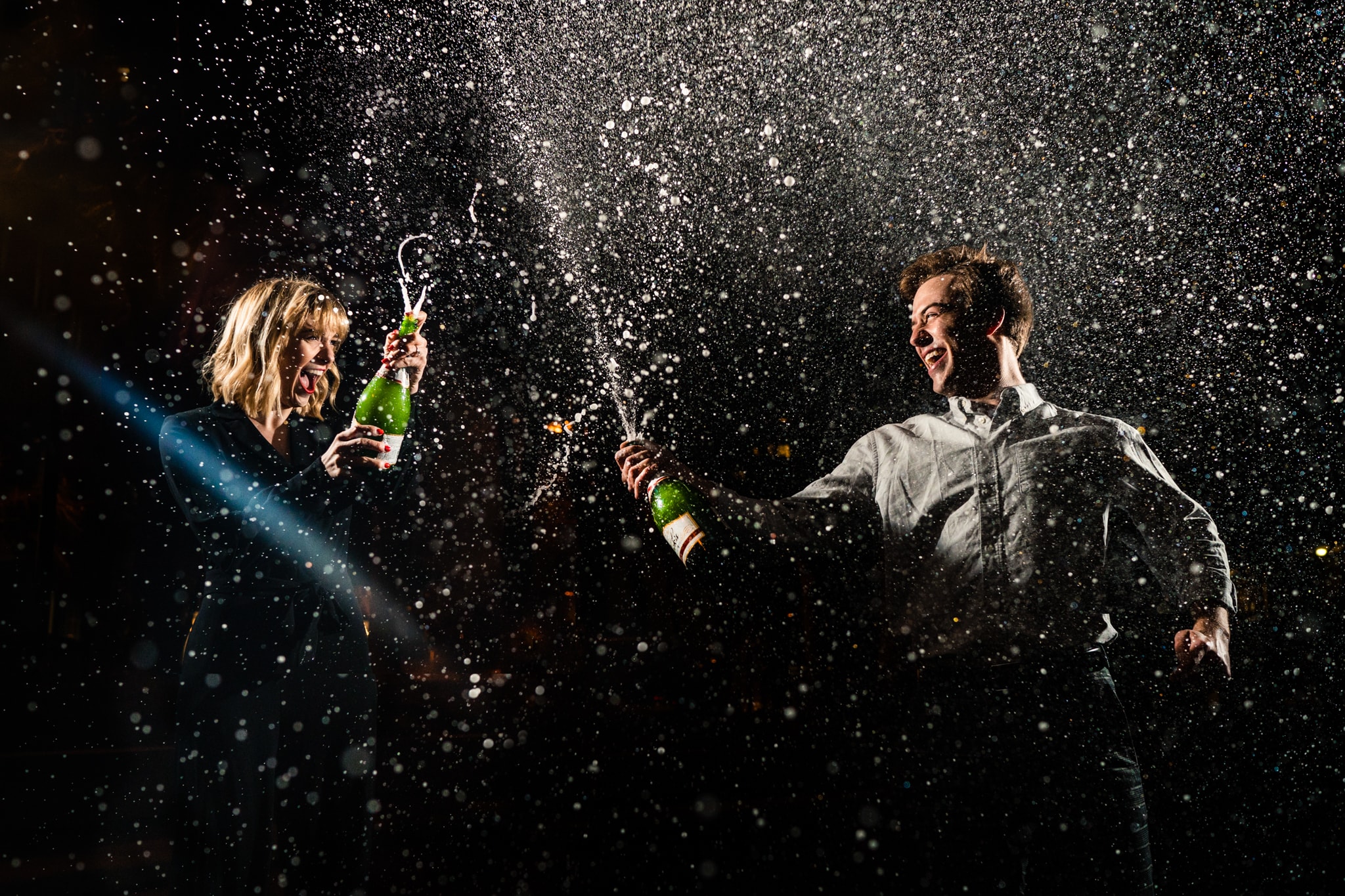 Engagement photos are one of the most exciting first steps of being engaged, and finding a professional wedding photographer can be daunting — especially if searching for a professional photographer in a city you aren’t familiar with! Many couples don’t consider is the fact that many professional wedding photographers love to travel — myself included. And, when one of my favorite people I’ve met while photographing Hamilton: An American Musical texted me a selfie of her and her new fiancé, and asked me if I was willing to fly to Kansas City to photograph their New Years Eve engagement photos, the answer was a resounding YES!

I first met Sam while photographing the Hamilton: An American Musical cast in Chicago, Illinois, and we immediately hit it off. From her bubbly personality, to her self declared awkwardness (which I identify with on a spiritual level), to her ridiculously adorable French Bulldog, Frankie, Sam and have become friends over the past two years beyond the initial photography. So when she shared with me that Zach, her incredible fiancé had popped the question, I was thrilled. And, when she asked me to come hang with them in Kansas City over New Years Eve to photograph their engagement session, I was even more thrilled! I knew it was time to bring out all the photography stops for these two, because anyone amazing enough to win Sam was certainly going to be incredible.

And it was true!

Sam + Zach met in college at the University of Cincinnati and remained friends throughout their Broadway adventures, which currently have Zach in the National Tour of Book of Mormon, and Sam finishing a stellar run with Head Over Heels in New York City on Broadway. And, like any amazing love story, they reconnected after their lives had moved through new adventures after college, and the rest is history!

Wandering Kansas City with them during their engagement session was an absolute blast, and as has always been the case, it was a joy to photograph them! Their chemistry is incredible, and even on the ridiculously frigid day, they were game to play and create killer images. We began their engagement session in Burr Oaks, surrounded by the forest for an outdoorsy vibe that complimented Zach. After that, we headed into Kansas City for a more urban vibe to compliment Sam, opting to wander the alleyways of the West Bottoms and create engagement photos that implemented the city’s surroundings. After a brief stop for dinner, we headed back out into the cold to finish off the photo session with some nighttime portraits, creating some of my favorite engagement photos to date!

Regardless of the temperatures and no matter the location, these two were fantastic in front of the camera. Zach + Sam, thank you so much for inviting me to Kansas City to capture your engagement photos, and I cannot wait to be your wedding photographer! Until then, I can’t wait to see you when you come through Dayton in the Book of Mormon, Zach, and I hope to catch you in your next exciting role as well, Sam! Cheers to both of you!